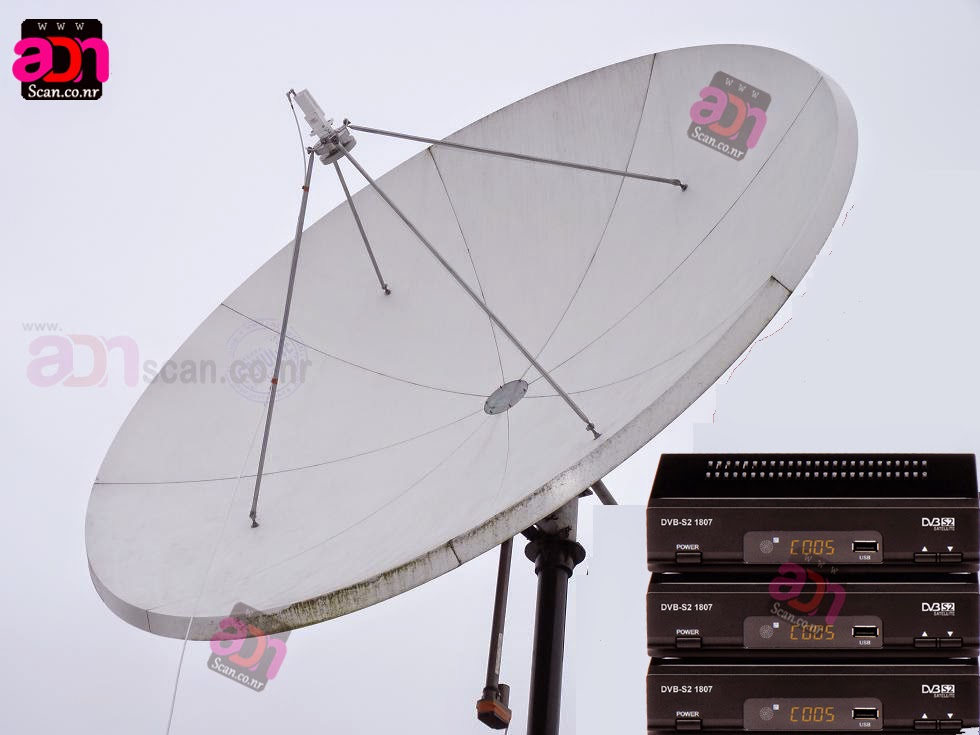 Installation menu[edit]
This is the main control panel that allows the user to configure the receiver to interact with LNBs, switches, motors, and other equipment. The user selects the LNB type, local oscillator frequency, appropriate DiSEqC switch port, and motor configuration. If all the settings are correct for the appropriate equipment, a signal bar showing strength and quality will appear. At that point, the receiver can be used to scan the satellite to detect channels.

There are 63 satellites in orbit over the Americas, 57 over Europe and a further 64 over Asia, a significant number of which will be receivable from any one location. Each of these has a different number of active transponders. Each transponder operates at a different frequency and symbol rate. Many FTA receivers are designed to detect any active transponders and any channels on those transponders. Because they are designed to do this without needing to be pre-programmed with the transponder information for each satellite, this process is referred to as a "blind" scan—as opposed to a satellite scan, which scans according to pre-set transponder values.

Once a scan is complete, the channels can often be sorted alphabetically, in satellite/transponder order, or in scrambled/unscrambled order. Additionally, third-party software often allows the option of sorting by the channel's Station Identification (SID) number. This is so that the individual channels can be numbered in a way that mimics the lineup of Dish Network or Bell TV. Channels can also be renamed or deleted, either in an on-screen menu or with external software.

The most popular software used to configure and sort channels is a database program called Channel Master, which allows the user to name, number, sort, and delete channels and then save them in a format that can then be written to the receiver. The file created that contains channel information is called a channel list. Many older and discontinued receiver models are supported in Channel Master, though most newer and less popular ones are not.

Most FTA receivers give the user the option of configuring the language, aspect ratio, TV type (NTSC/PAL), and time settings.

Typically, most FTA receivers can accept an MPEG2 video stream in either PAL-compatible (540/704/720 x 576) or NTSC-compatible (640 x 480) image formats and convert it for display on either a PAL or NTSC monitor. There is some loss of image data due to NTSC's lower resolution. Some receivers also support output to SCART, S-Video, HDMI or component video.

Unlike package receivers promoted for use with a limited number of satellites controlled by an individual pay-TV provider, an FTA receiver is designed to be capable of receiving any free signals from all available satellites visible in a given location. To fully exploit this capability, most Ku band FTA receivers will control a DiSEqC motor which can rotate a single dish to view one of any number of multiple satellites.

An alternate approach of pointing a fixed dish (or LNB) at each satellite to be received (then feeding the individual signals into a remotely controlled switch) is compatible both with standard FTA receivers and the more-restricted pay-TV "package receiver". The most common standard for use with FTA receivers is a DiSEqC switch which normally allows automatic selection of signal from four satellites. A simpler two-position remote switch operated by a 22 kHz tone is also occasionally used for North American reception, but this configuration is not compatible with European-style universal LNB's which use the tone internally for band-switching.

A toroidal antenna may be used with multiple LNB's to receive multiple satellites in various locations over a 40° arc. Unlike the single parabola of a standard satellite dish antenna (which is best adapted to focus one target satellite to a single point), the toroidal antenna uses a reflector pair to focus multiple signals to a line.

Individual adjacent or near-adjacent pairs (such as Glorystar on 97°W and 101°W) may be received, due to their close proximity, with two LNB's on what otherwise looks geometrically to be a standard parabolic dish. The outputs from these individual LNB's may then be fed through a switch to a receiver, providing access to all signals on both satellites.

An on-screen program schedule can be accessed that also contains descriptive information about a selected program. The availability and quality of programme guide information varies widely between broadcasters (some provide nothing) and the ability of receivers to collect and store guide listings from multiple sources is also variable. Receivers with more memory (or storage on external devices such as hard drives) are often, but not always, better equipped to store and retrieve on-screen programme listings. In some cases, a receiver with both satellite and terrestrial tuners will provide on-screen guide support for one mode of operation but not both.

A few high-end receivers feature the ability to record programs, pause, and review live TV. Often, a hard drive is not included when the unit is purchased, which allows the user to install any desired hard disk drive. Many newer units are equipped with a USB 2.0 port that allows the user to connect a portable hard drive; at least one unit (the Pansat 9200HD) uses external SATA as PVR media storage.

Some receivers, such as TripleDragon or Dream Multimedia's Linux-based Dreambox series, provide local area network interfaces. This allows the use of network-attached storage to provide PVR-like functions (some of these models also include internal hard drives or USB) and allows the unit to be controlled or updated via network.

The use of desktop personal computer cards to deploy DVB-S or terrestrial digital television tuners allows the computer's hard drive and network storage to be used to archive electronic programme guide information and recorded television programming. Most or all of the base PVR functionality becomes available by default at little or no added cost.


This section needs additional citations for verification. Please help improve this article by adding citations to reliable sources. Unsourced material may be challenged and removed. (October 2009)
Most standard FTA receivers support DVB-S, MPEG-2, 480i or 576i SDTV received as unencrypted QPSK from Ku band satellites.

High-definition television is also beginning to be supported by a limited-number of high-end receivers; at least one high-end stand-alone receiver (the Quali-TV 1080IR) supports both 4:2:2 and HDTV.

4:2:2 is a version of MPEG-2 compression used in network feeds such as NBC on Ku band (103°W). Some broadcast networks use 4:2:2 encoding for otherwise-unencrypted transmission of sports events to local terrestrial stations, as it provides slightly better colour than the standard 4:2:0 compression.

In some cases support for additional standards (such as DVB-S2, MPEG-4 and 8PSK) will also become necessary to receive a viewable signal.[5] The use of newer means of modulation and compression is likely to become more widespread for high-definition television feeds, in order to partially offset the larger amount of transponder space required to deliver high-definition video to television stations.

In countries using the DVB-T and DVB-C standards for terrestrial digital television and digital cable, a few higher-end receivers provide an option to install terrestrial DVB tuners either alongside or in place of the stock DVB-S tuner. Dream Multimedia's DreamBox series, for instance, supports this in a few selected models.

In countries using ATSC, inclusion of terrestrial tuners in DVB-S FTA receivers is rare, with one key exception. Some HDTV FTA receivers incorporate terrestrial ATSC tuners. These typically do not support ATSC's unique major.minor digital subchannel numbering scheme or the on-screen program guide but are capable of displaying (or timeshifting) local HDTV with no loss in detail. Channels from these receivers are numbered using FTA conventions, by which the first channel found is most often arbitrarily given channel 1 as its virtual channel number.

A few high-end receivers feature HDTV. In North America, these often include an ATSC over-the-air digital television tuner and MPEG-4 support. A few HDTV units allow for the addition of a UHF remote control. However, an 8PSK module can be installed in place of the UHF remote and allows the receiver to decode the format used on most Dish Network high definition programming.

These units are superior to DVD recorders for time-shifting HDTV programming, as most DVD units down-convert OTA HDTV signals to standard-definition to match the limitations of the DVD standard. An HDTV FTA receiver with ATSC capability and USB storage can record one channel from a terrestrial or satellite DTV transport stream entirely losslessly, although the on-screen guide for terrestrial reception is often limited and viewing or storage of analog NTSC channels is not supported.

Availability of free programming[edit]
While significant amounts of programming remain free, there is no assurance to viewers that any individual broadcast currently available free-to-air will remain so. Some will inevitably move to incompatible signal formats (such as MPEG 4:2:2, 8PSK, DVB-S2, or MPEG-4), change from free to encrypted, move to different satellite locations (often across bands, where C band reception requires much larger antennae) or shut down entirely.

The onus is on receiver vendors to voluntarily indicate, whenever they use lists of currently available FTA programming for marketing purposes, that free channels frequently may appear, move and disappear, often on a permanent basis, with no advance notice. One North American example was Equity Broadcasting, once a major source of small local terrestrial stations on free satellite television. Equity filed for Chapter 11 bankruptcy on December 9, 2008 and most of Equity's terrestrial stations were sold at auction in mid-2009.[6] As many of the stations (such as New York's WNGS and WNYI) were sold to Daystar and now originate nothing, the corresponding unique free-to-air signals (Galaxy 18, 123°W) are no more.[7] Even where a signal still exists, an incompatible signal format such as that of the NBC feeds (AMC 1 at 103°W, now requires 8PSK, DVB-S2 and HDTV support to receive anything) can remove a channel from virtually all standard FTA receivers.

Many receivers will provide options for hardware expansion (such as to add 8PSK reception or DVB Common Interface TV subscription cards) and firmware upgrade (either officially or from nominally third-party sources). Most often, once the individual receiver model is discontinued, this support and expandability rapidly disappears from all sources. The migration of existing feeds to formats such as MPEG-4, HDTV, or DVB-S2 (which many current receivers do not support) may also result in viewers losing existing free programming as equipment becomes rapidly obsolete. Unlike digital terrestrial set-top boxes, most standard-definition DVB-S receivers do not down-convert HD programming and thus produce no usable video for these signals.

There have also been incidents where existing receiver designs have been "cloned" or copied by competing manufacturers; a manufacturer will often reduce support for a widely copied receiver design. In some cases, malware has been released, ostensibly in the same format as existing third-party firmware, in an attempt to interfere with the further use of a widely cloned receiver's design.

FTA receivers are ostensibly designed for free-to-air use but can be adapted for other purposes. In some jurisdictions, this dual-use nature can cause problems. Thus, combatting piracy involving FTA receivers has been difficult using legal means.
Share :
Tweet
✚

Congratulations prabhas Thank you for your comments!
Reply